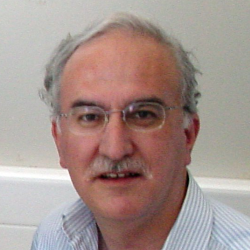 I obtained my Physics degree in 1981 at the University of Granada (Spain).

I became an astronomer at the National Astronomic Observatory of Spain between 1984 and 1989, becoming an astronomer specialized in instrumentation since 1986 as the technical manager of the 1.5 m telescope of Calar Alto Observatory (CAHA).

Between 1987 and 1989 I was the IAA (Institute of Astrophysics of Andalucía) responsible of the ALFOSC spectrograph and I collaborated in the development of a coupler to the 2.5 m NOT telescope at the Roque de los Muchachos Observatory in La Palma, in collaboration with the Copenhagen Observatory.

From 1989 to 1997 I was the IAA responsible of the design, development and building of the electronics and control software of the fiber spectrograph ALBIREO, which is installed in the 1.5 m telescope of Sierra Nevada Observatory, Spain, in collaboration with the Paris-Meudon Observatory in France.

Between 1997 and 2006 I participated actively in the design of the telemetric-telecommand interface between the instrument GIADA and ROSETTA spacecraft, in mission to the comet 67P Churyumov-Gerasimenko, within the IAA team and ESA.

From 2001 to 2002 I designed and built a self-guiding system and the control electronics of the NEW SILFID spectrograph, which is installed in the Kavalur Observatory in Bangalore (India) in collaboration with the Indian Institute of Astrophysics and the Paris-Meudon Observatory.

Between December 2007 and April 2009 I was Deputy Director of Technologic Businesses at the IAA.

Since 2008 I participate actively in BigBOSS project (called DESI from 2012), under the leading of LBNL (Lawrence Berkeley National Laboratory) and several international teams from China, U.K., Australia and Switzerland. The IAA team collaborates in the characterization and automation of the robots that position the focal plane fibers. In 2012 this project was renamed as DESI(Dark Energy Spectroscopic Instrument), and the IAA team is involved in the miniaturizing of the position robots.

Since 2008 I participate actively with TRAPPA Group within ASIM project, by acquiring transient luminous events spectra, as a ground support to scientific data acquired from ISS.

All my life I worked in the engineering and technical career, defining together with scientists and astrophysicists requirements and characteristics of the instruments to perform, which have been both ground and space instruments.

Already defined and detailed the instrument, the work is to design, build, test, integrate and validate instruments at different stages or milestones that depend on each instrument or each space mission.

Back to Our Team